The Isle of Man has changed its income figures – to claim £62.8 million from the UK

Three weeks ago I suggested that the Isle of Man would be restating its income data when new information was published.

And now that data has been published.

And the Isle of Man has, as I predicted, restated the basis on which its income is calculated. As it says:

The Treasury has released the Isle of Man National Income Accounts for 2008/09.

National income provides a measure of the income generated through economic activity over the course of the year.

The accounts rely principally on data derived from personal and company income tax records and this explains the gap between when the results are produced and the year in which they relate.

This latest report on the accounts takes on a different look this year, a result of some significant changes to how the figures are calculated.

The 2008/09 accounts reveal that the Island’s economy (as measured by gross domestic product, GDP) grew by 11.6% in current values or by 4.7% in real terms in the year. Other key results are:

â€šÃ„¢ there was real growth of 57% in the ICT sector, driven by the development of the e-gaming sub-sector

â€šÃ„¢ the banking sector expanded by over a fifth, despite the onset of the global financial crisis

â€šÃ„¢ there was growth above the national average in insurance, CSP and professional services

â€šÃ„¢ there was some contraction in engineering and general manufacturing

â€šÃ„¢ it was a difficult year for retailing and for tourism and related industries.

Candidly, much of that data is implausible.

And let’s look at the impact of the change: 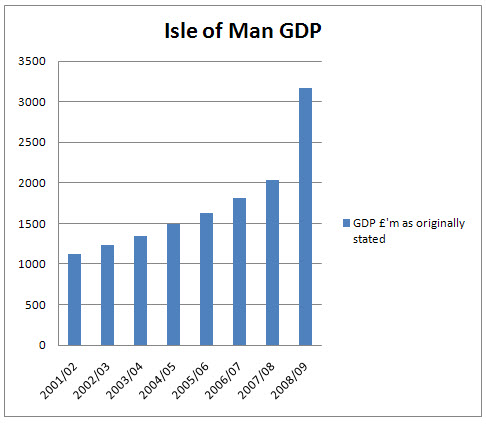 And why have they done this? Well, let me remind you of a little problem the Isle of Man has: it’s called its VAT black hole. In October 2009 the massive VAT subsidy the UK gave to the Isle of Man each year, amounting to  some £180 million to £200 million a year was reduced by £140 million a year by changing the basis of calculation. According to many, including many politicians in the Isle of Man this happened as a result of my having drawn attention to the issue on my blog — and I’ll unashamedly accept credit for that. I was just about the only person to ever write on this issue so it seems highly likely that this story is true.

But it is important to then note how the split of VAT receipts between the UK and the Isle of Man is calculated: I’ve put the sample calculation on line, here.

The calculation starts by comparing national incomes. So what has the Isle of Man done? It’s restated its national income, not just a bit, but by inflating it  enormously. And since the UK’s national income has taken a bit of a hit of late the result will be a massive shift of resources to the IoM.

That is £62.8 million claimed by changing the books.

And there is only one answer the UK can make in response — and that is to demand another revision to the calculation basis.

As I showed in November 2009, the UK was still subsidising the Isle of Man by at least £40 million a year after the last revision. With the current trickery added in that will increase to £100 million.

When the UK can’t afford universal child benefits the last thing it can afford is to subsidise the wealthier population of the Isle of Man who with this latest change in their system to seek, as ever, to abuse the rules, show how undeserving they are.

This subsidy has to be withdrawn once and for all, now.