Martin Wolf is at it again: the deficit hawks have got it wrong

From Martin Wolf in the FT:

Yes, I understand that huge fiscal deficits make people nervous. I understand, too, the desire to make solvency credible. But following fiscal rules blindly, while ignoring what is going on in the private sector or in external balances, is a recipe for disappointment and political conflict. Fiscal stabilisation that supports growth is welcome. Premature fiscal stabilisation that undermines it is yet another folly.

To prove his point, these graphs:

As he makes clear: equations balance. That’s the annoying thing about double entry for you.

And as the second graph makes especially clear, the government deficit in the US (and the same happens elsewhere) has arisen because there are massive private sector balances. For advanced countries as a whole the equation balances, of course. Private surpluses equal government deficits. We are lending to government.

Which came first – private retrenchment or fiscal deficits? The answer is: the former. In the case of the US, the huge shift in the private balance between the fourth quarter of 2007 and the second quarter of 2009, from a deficit of 2.2 per cent of GDP to a surplus of 6.6 per cent, coincided with the financial crisis (see chart). The fact that aggregate demand and long-term interest rates tumbled at the same time shows that the collapse in private spending “crowded in” the fiscal deficits. Wild private behaviour drove the wild public behaviour.

In other words, as I have often said, the collapse in government revenue came because the private sector voluntarily withdrew from the economy leaving the state to pick up the pieces. That’s why this happened: 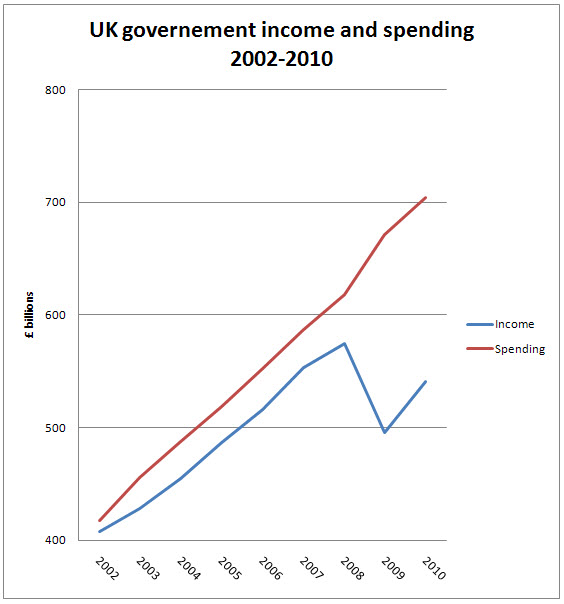 And so, as Wolf again says:

So how quickly should deficits be eliminated? We must recognise the danger here: cutting public spending will not automatically raise private spending. The attempted reduction in the structural deficit might lead, instead, to a rise in cyclical fiscal deficits, which would be running to stand still, or to a reduction in the private surpluses only because income fell even faster than spending. Either outcome would be grim. Yet neither can be ruled out.

As long as output remains depressed, the fiscal support is most unlikely to be inflationary. Nor will it crowd out the private sector: it is more likely to crowd it in.

Which means all the cards are in the ands of governments right now.

So why do the deficit hawks like to pretend otherwise? That makes no sense at all.