The cuts are based on the premise that people will take more risk when faced with increased uncertainty. And it’s wrong

The Economics of Ignorance is widespread. It is what is fuelling wholly politically motivated demand for cuts in our economy.

The economics of ignorance is class warfare: the desire of the ‚Äòhaves’ to claim more from the ‚Äòhave-nots’. It is not economics as such at all.

However, the most astonishingly spurious claims are put out in support of it. take these from Andrew Lilico, the chief ‚Äòeconomist’ of Tory think-tank The Policy Exchange, writing in the Observer this weekend:

We should cut early, as deep as is feasible given time-tabling constraints. We need growth, and early cuts are likely to promote growth, even in the short term. There are three reasons why.

First, at lower levels of public spending the economy is likely to grow faster. If the economy grows faster, then wages will grow faster. So households today will feel safe to borrow and consume more and to save less, knowing that their (pre-tax) incomes will be higher later, allowing them to pay off their debts. Investors will also expect better returns if growth is faster.

Next, if we cut spending early, households will be more confident that the UK's huge deficit – about £160bn, or 11% of GDP – will be addressed mainly through spending cuts rather than tax rises. Becoming more confident that their taxes will not go up, households' expectations of their post-tax incomes will rise, again allowing them to borrow and consume more and save less today.

Third (and less important, unless matters go badly), when deficits are very high financial markets may become concerned that governments will default or inflate to escape their debts. This fear means that the interest rates paid on government debt rise, raising the price of borrowing across the economy. The effects can be very large – if sustained for any length of time, a deficit of 11% of GDP could add 2% or more to interest rates, costing households many hundreds of pounds per year. Cutting spending to cut the deficit should allay these fears, allowing interest rates to stay low.

Let me deal with all three arguments in turn.

The first argument is not an argument at all: it is a statement of faith. It is also a statement of faith not supported by any facts. First of all, whether opponents now like to recognise it or not, the longest period of sustained growth in the UK came under the Labour government from 1997 until the onset of the crash. That did not happen because of reducing government spending: as we all know government spending rose. But so too did profits. As a share of GDP they looked like this: 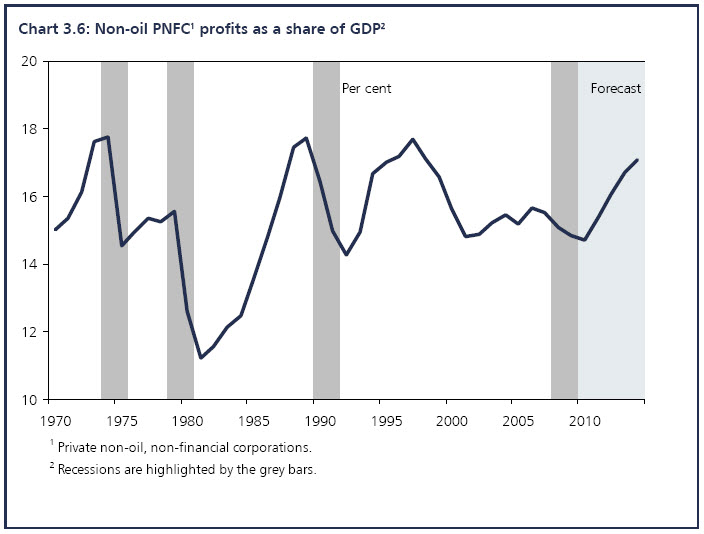 Profits, which no doubt Mr Lilico would say drive growth fell when state spending was tight from 1995 to 2000, and just into the recession that followed. Then they rose, and sharply in absolute terms as GDP was also rising significantly. In other words profits rise when state spending rises, not vice versa. Cutting state spending now is likely to reduce profits, that’s what the evidence says. There’s little sign of growth there.

Nor is it likely as Larry Elliott as pointed out:

The budget hawks like to cite Geoffrey Howe’s draconian 1981 budget as evidence that fiscal tightening is perfectly consistent with economic growth. So it is, providing there is scope for an over-valued pound to depreciate and for excessively high interest rates to be cut. So it is, provided that tumbling oil prices raise the real incomes of consumers and cut costs for businesses. All these things happened in the early 1980s; none of them are likely to occur now. The pound has already fallen by 25%, interest rates are at 0.5% and oil prices show no sign of falling much below $70 (£48) a barrel.

In other words: there is no prospect of this happening.

But there is another quite fundamental reason why people will not react as Lilico suggests they will: if state spending falls state provision falls. If state provision falls the safety net the state provides falls. If the safety net is reduced then the savings people have to make to cover the risk previously assumed by the state increases. That follows like night does day. It’s exactly why it is assumed in the Office for Budget Responsibility reoport that savings ratios will remain high: 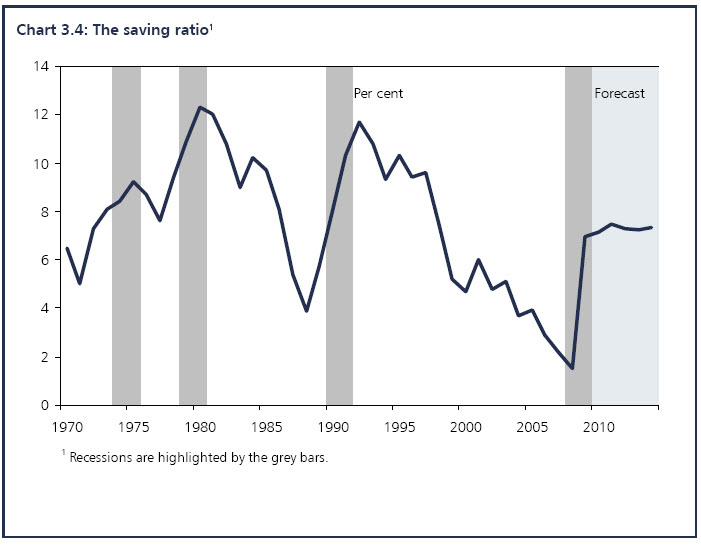 No sign the OBR thinks people will be going out spending there: far from it in fact. they’re saying they’ll behave as I predict. And that does not drive growth. In other words, even the OBR think Lilico’s claim is shot through.

The second claim can be dismissed for the same reason. let me give a very personal anecdote. My wife might one day receive an earnings related state pension as a result of her work for the NHS. In this household, as I suspect in every other one of the 6 million households where those pensions are under threat we’re now discussing whether we should try to increase savings to compensate for the fact that state spending cuts are designed to impose a greater cost on us – even though she and her employer have made substantial pension contributions to date.

Add to that the fear that people will no longer be paid when unemployed or sick – and cuts in both benefits are likely – and rational people will in the face of spending cuts save, not spend. If they fear interest rates will rise as well, as they might given this government's wish to talk down the pound and so fuel inflation, then they’ll do the same by seeking to pay off their mortgages.

The simple truth is when insurance is removed people save. That’s what the government intends to do. Growth will fall, not increase as a result.

So let’s deal with the third suggestion. A Paul Krugman put it:

In short: the demand for immediate austerity is based on the assertion that markets will demand such austerity in the future, even though they shouldn’t, and show no sign of making any such demand now; and that if markets do lose faith in us, self-flagellation would restore that faith, even though that hasn’t actually worked anywhere else.

And this, ladies and gentlemen, is what passes for respectable policy analysis.

Why does he say this? Because there is no sign whatsoever that there is any shortage of willing lenders to government – those households doing all that saving noted above being a major component of the supply of buyers. 90% of UK debt is home owned.

In other words, the entire argument for austerity is based on a myth. A myth that the likes of Policy Exchange promote.

It’s not just bad economics: it’s the economics of ignorance – which is not economics at all.

But it is outright class warfare as the rich seek to capture the state for their own benefit.

And that is why it has to be opposed.