More on tax incidence – and why corporation taxes work

I knew that re-opening blog comments and writing on tax incidence on the same day was going to attract attention, and it did. Tim Worstall turned up as predictably as a bee round a honey pot to assure me I’d got it all wrong. So did other past regulars, like the falsely named Alex. Interestingly, although the latter clearly sides with Worstall on the incidence issue — arguing that corpropation tax is not paid by companeis he can’t help but reveal the duality of these people's position, saying:

[George Buckley of 3M] is quite right about the transport system and the UK corporate tax regime is probably the most complex in the whole world, with very ungenerous rates of capital allowances for companies like 3M, so his comments are not surprising.

Hang on though Alex — if corporations don’t pay tax who cares what the capital allowance rate is? Companies can pass the bill on anyway so does it matter? Well of course it does — or business and Alex would not make such a big deal of it. The reality is they think this matters for one good reason — because they know they pay the tax. Like it or not that is the true answer to this debate.

But let’s return to Tim Worstall for a moment. Note what he says:

You’re still not getting the point about incidence. We’re not trying to say that the corporation decides to stick someone else with the tax bill. We’re not imputing desire here at all.

If we tax the returns to capital in a specific place then less capital will be added to labour in that place. Labour there will thus be less productive and get paid less. So, some of the burden of the taxation of capital will be carried by the workers in the form of lower wages.

We’re absolutely not trying to insist that managers of corporations try to stick workers with the tax bill. We’re just noting that the imposition of such a tax changes behaviour and thus changes other things as a result of that change in behaviour.

But note three things. First, Worstall sticks to the classic manufacturing model of an economy beloved of economists who think the world is still made up of people making their way to tend smoking stacks. It isn’t like that: most capital is now human, not physical. The model he refers to is a complete fiction of his imagination. Second, note the classic “other things being equal” argument. The trouble is they are not. The EU apart (and Worstall’s living in Portugal whilst working for the anti-EU UK Independence Party is a classic example of this exception to the general rule) labour is very immobile. Some sorts of capital — rather oddly the least productive forms — are quite mobile. But it’s very clear “not all things are equal”. Third, no manager I have ever spoken to recognises the behaviour that Tim describes.

What does that mean? That it doesn’t happen? Or that if it does there may be some other entirely plausible explanation? 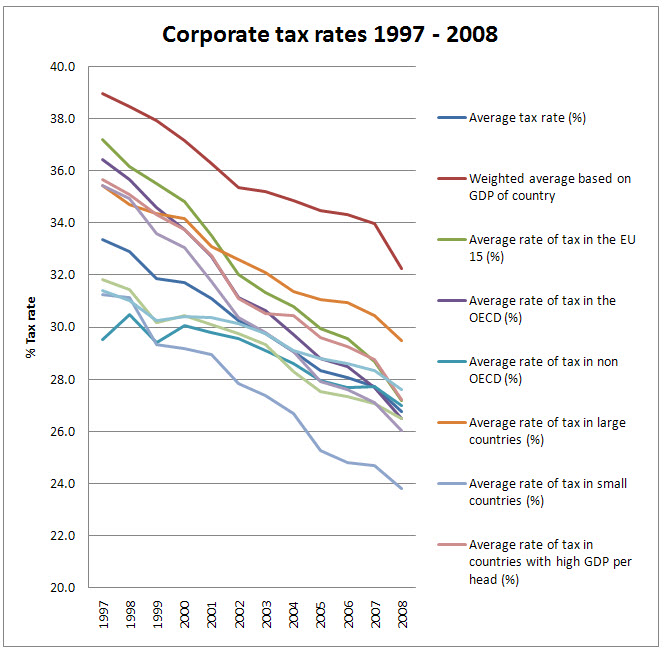 Source data is from KPMG, I did the analysis. Note the number of increases in tax rates and then wonder about the validity of the research findings. Second — note that to do this work Devereux et al assumed the conditions for general equilibrium modelling existed. Someone recently wrote of this “Friedman propagated the delusion, through his misunderstanding of the scientific method, that an economy can be accurately modelled using counterfactual propositions about its nature”. I’d suggest the authors of that research are subject to the same delusion.

In that case let’s assume for a moment that there may be other reasons for noted change in behaviour and return to Tim Worstall who next says:

You keep telling us, for example, that every transaction has to be treated as an “arms length” transaction. As if it were between two unrelated companies, bound only by contracts. Only then can we see whether someone is fiddling the transfer pricing.

This is untrue: that’s not at all how I see the multinational corporation: that’s how the OECD sees it. I see it very differently, as an integrated whole which is none the less rooted in the communities that host its activities. That’s why I propose unitary taxation. In which case I agree with Tim that:

But if at the same time we’re insisting that a multi national is not simply a group of unrelated companies, bound only by contracts, that there is some dynamic unity which is more valuable than the sum of the parts (which is what Coase is telling us is the reason such multi-nationals exist) then we cannot allocate that value to those parts, can we?

In a sense, that’s true. Of course world wide tax for multinational corporations is then the obvious answer, but I think we’re a wile away from that yet, and the reality is that multinational corporations both need to relate to national governments as that is what we have and to pay them — as they’re the only collection agents we’ve got right now.  In that case a mechanism to do so has to be found. Arm’s length pricing is one way of doing so — but does not reflect economic realities. Unitary apportionment does seek to reflect how the multinational corporation adds value, and country-by-country reporting provides the data to allow this to be calculated.

Except Tim then objects to the value an multinational corporation creates being taxed at all:

If we say that because more value is created then each location should get more taxâ€šÃ„¶.well, we’ve just decided to tax the more efficient form of organisation more than the less efficient one. Which doesn’t sound all that sensible. We generally think that efficiency should be rewarded, not punished.

So now we come to the core of it: taxing the value multinational corporations create is a bad thing according to Tim. See the incidence argument in that light,and the extraordinarily spurious data that is used to support it and you suddenly see that the economics supports the politics, not the other way round. None of which is surprising — all economics is normative whatever its exponents claim.

But let’s also look at the consequence of this. Suppose for a moment we said that because business does pass on all its taxes to others it should not act as a paying agent for tax (that’s the incidence argument after all). In the UK corporation tax take will be about £35 bn this year, down from a peak nearer the high 40s. Business (or at least PWC) argues that for every £1 of corporation tax they pay they pay £1 of other tax. So let’s cut all the other taxes they claim they pay out as well and exempt them from £70 billion of tax.

What now? Who will pay since we know we need this revenue to fill the budget deficit? Let’s apply a little logical thinking to this. The potential groups who might pay are logically shareholders, supplies to corporations, customers of corporations and those who work for companies. I’ll suggest that’s a comprehensive enough list.

Let’s knock out straight away one possible settlor of the additional tax: that’s the suppliers. They’re corporations too, so that tax won’t stick there as they're now tax free.

Let’s look at shareholders next. About one sixth of these are UK pension funds in the case of FTSE companies — who pay most tax in the UK. Pension funds don’t pay tax About 40% of ownership of the FTSE (the last time I looked) was overseas — it may be higher now. So put these together and instantly over half of the shareholders cannot or will not have the tax charge transferred to them — at least in the UK. So this income falls outside UK tax entirely. What of the rest — those in the UK? Well, if as the incidence brigade argue these are ultimately individuals then they’re also, because capital ownership is concentrated amongst the best off, those with the lowest overall rates of tax in the UK and the highest rates of tax avoidance. Effective tax rates in the UK are shown here: 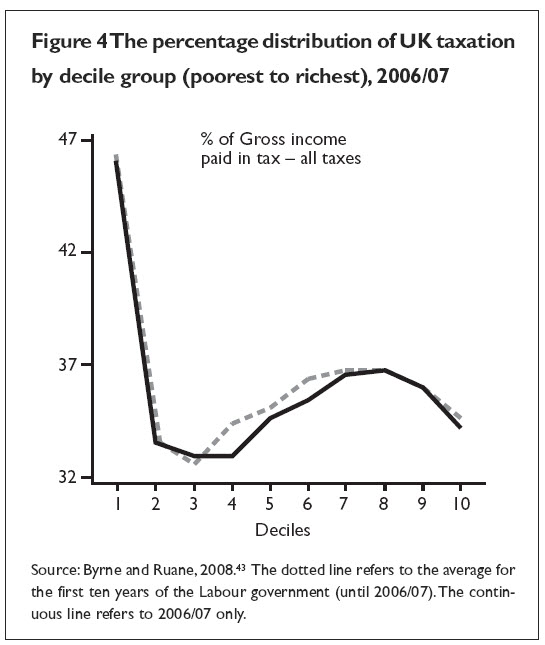 As progress into the top 10% increases dividend income rises and effective tax rates fall. Passing the burden to shareholders is therefore regressive at best in the overall tax take and quite probably ineffective with regard to UK investors. I have of course suggested mechanisms to tackle that, but let’s assume the current tax system for now. The fact is shareholders are unlikely to pick up the tab.

So, as Tim argues it’s either customers or labour who will. Customers are most likely to do so via VAT. This is only charged within the UK so customers and labour might be considered as being in the same pool.

The Institute for Fiscal Studies has proposed replacing corporation tax with VAT. They got their numbers wrong, but let’s not worry. As I have shown  their logic — which also extends the VAT base, increases the average household food bill in the UK by more than £13 a week. This is incidence at work, and regressive beyond doubt, being almost three times more penal on the poorest than best off in society.

As for income tax? let’s assume that it picks up what VAT can’t - £35 bn or so, and that as the rich apparently always avoid this charge or run away from it this must fall by default on basic rates. So that’s another regressive move.

The implication is clear then — abolishing corporation tax has to be regressive. No other possibility exists. And yet Devereux at al argue that its imposition is also regressive. What can this mean? There are three options. One is I am right (as this logic seems to suggest true). Or Devereux is right — but his analysis provides flimsy evidence for it — or we’re both right. Both right? Yes — try this: 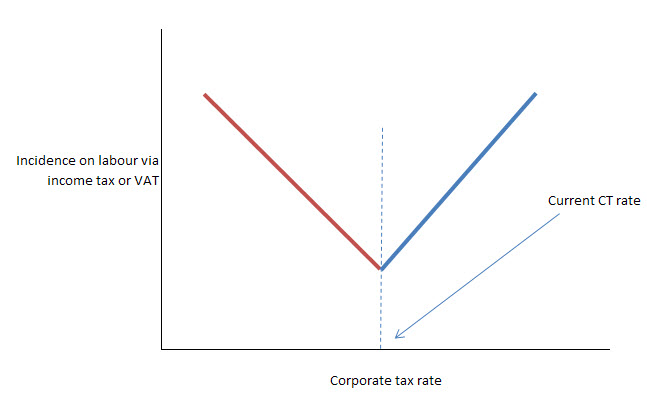 It’s a sort of inverse Laffer curve where my argument is to the left of the current CT rate and Devereux et al’s to the right —  and by some chance the current corporate tax system happens to be optimal — incidence on labour goes up whether we increase or decrease corporation tax rates. The chance that’s true? Near zero, of course.

If you disagree prove it wrong, logically, from first principles, using real facts, not models that are so abstracted from reality that they have no relationship to it.