The future of Jersey

I was on BBC Radio Jersey this morning (no link yet) - replying to deputy Chief Minister Terry le Sueur, who was welcoming the government's planned new review and saying things like this, included in a press release they put out yesterday:

The Review will give us a further opportunity to show the strength of Jersey's regulatory system and the extent of our international co-operation and transparency. We are confident it will also provide us with further third party endorsement of our continuing compliance with international standards, of our preparedness to cope with the present economic climate and withstand future shocks, and also of our ability to sustain the long term stability of our economy.

Unsurprisingly, I disagreed. I had planned my comments in advance, as I often do, using a MindMap. When you're live at 7am that's especially important! It looked like this: 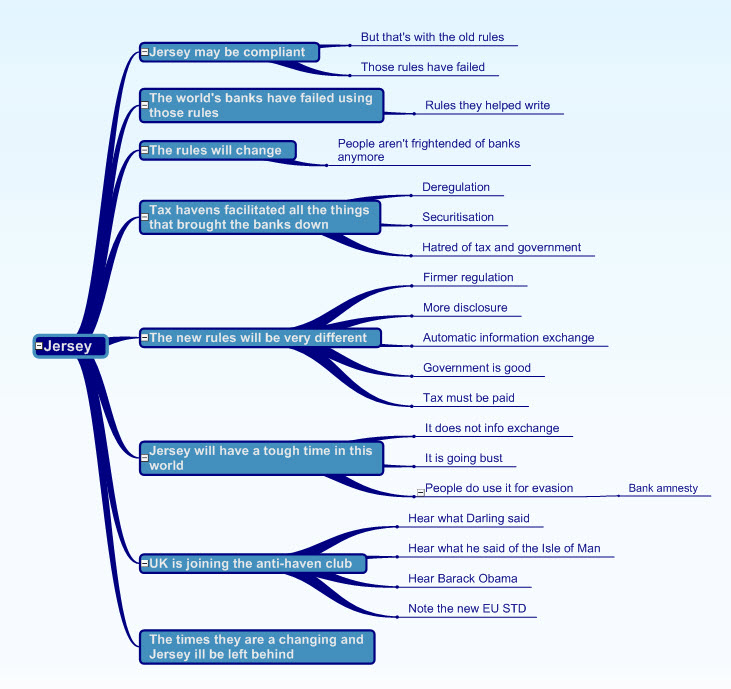 That last one should have been 'will', I note.

And this is why I could say with confidence on air that Jersey's days as a haven are numbered. It is playing by the rules, but it's playing the wrong game. The game has changed, and theirs is now over.

OK, it will take time, but Senator le Sueur is leading the people of Jersey up a garden path if he really thinks that this plan is good for them. It won't be. This time the new anti-haven alliance of Washington, Brussels and London means business, and this time they will be dragging the OECD and IMF behind them.

PS: The MindMap took a minute or two using MindGenius. I strongly recommend it as a productivity tool.