United Business Media: the real story of its tax

The Times has reported that:

United Business Media (UBM) is to join a growing exodus of companies from the UK by shifting its tax base to Ireland, dealing a fresh blow to the Government's tax policies.

One has to wonder how two is an exodus, but let's ignore the hype. The company says:

United Business Media plc ("UBM") today announces a change to the corporate structure of the United Business Media group. These proposals will create a new UBM holding company which is UK-listed, incorporated in Jersey with its tax residence in the Republic of Ireland.

For historical reasons the United Business Media group's parent company has been tax resident in the UK. However as UBM has developed into an international business-to-business media and news distribution organisation, it has progressively disposed of its UK media businesses, including the Anglia, HTV, Meridian and Channel 5 television franchises, Express Newspapers, NOP market research and Exchange & Mart. Consequently, the Board of UBM now believes that the long term interests of UBM and its Shareholders are best served by the adoption of an international holding company corporate structure that domiciles UBM's parent company in the Republic of Ireland, which has a less complex system of taxation. In contrast, the UK tax system imposes tax on all companies in a worldwide group, and consequently UBM has had to manage the interaction between the UK tax system and the tax systems of the multiple countries in which UBM operates. This has given rise to both significant compliance costs and risks of inadvertent tax charges arising.

And now, let's look at the reality. The 2007 annual report provides a lot of useful data to analyse the companies tax position. I have used the follwoing, all taken from that report:

First of all, a geographic based segment analysis shows that about 26% of UBM activity is based in the UK. So, at best we wouldn't be expecting this company to be paying most of its tax in the UK. Under UK controlled foreign company rules the evidence provided suggests no more than this proportion of the tax bill of the company should be paid here. In that case, making UK tax the basis of a decision for reorganisation of the entity appears strange.

It's odder still when you look at the rest of the tax data on the company. First of all, likely taxable profits for the year (reported pre-tax profit plus goodwill added back as it's not tax deductible) amount to £149.5 million. That suggests a possible total tax bill at 30% of £44.9 million. Actually, the current tax charge as declared is £27.2 million, somewhat lower. Tax paid is even lower - just £5.3 million. This is part of a trend. Note the extraordinary outstanding tax bill of this company. The company says of this:

As previously disclosed, the Group is in dispute with HMRC with regards to a technical matter arising in relation to the sale of our Regional Newspapers business in 1998. The tax in dispute is estimated at £80m. The Group's appeal was heard at the High Court on 22 February 2007. The decision of the High Court went against the Group and the Group lodged an appeal with the Court of Appeal. The appeal was heard on 26 February 2008 and we are awaiting the outcome. Whilst it is likely that the matter will not be resolved until 2009 it is possible that the matter could be resolved during the current year.

Due to the uncertainty of litigation the Group continues to make a prudent assessment of the potential liability in its accounts for this and other matters and has recognised the full amount of tax in dispute as a liability in current tax liabilities.

But that can't explain all £227.6 million unpaid I suspect. It does, however, suggest a long term and persistent litigant on tax issues who is willing to take and pursue an aggressive tax position.

The same is also indicated by its tax reconciliation: 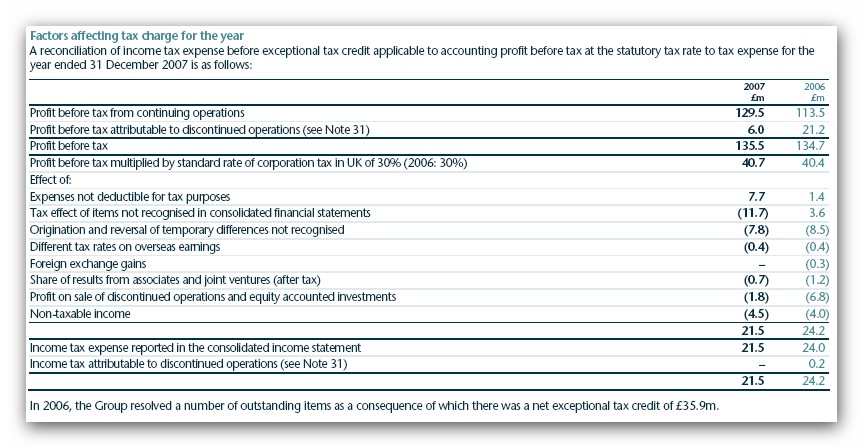 This starts from reported profit, but the key issues are the 'tax effect of items not recognised in consolidated financial statements' and 'origination and reversal of temporary differences not recognised'. Why aren't these issues not recognised? Simply because they almost certainly occur on intra-group transactions, which are of course eliminated from consolidated accounts. Combined these two half the group tax bill. The difference in overseas tax rates knocks just 1% off it. I call that immaterial.

So, here we have a company that is an aggressive and litigious tax avoider, that uses intra-group structures to reduce its tax bill and that in 2007 settled just £5.3 million of tax anywhere in the world, out of total liabilities potentially owing of £227 million, and whose total tax liabilities are almost 74% of its total equity. It's also a company that paid an extraordinary dividend that would severely prejudice, in my opinion, its potential ability to settle that tax bill if it were to fall due.

Now let's reappraise the loss to the UK of this company going. Realistically, it looks to have been an effective avoider of UK taxes as they stand now. Curiously, the change in law to allow dividends to be received in the UK tax free looks as though it might hit it hard by eliminating a lot of the tax savings it now enjoys. So it's going. What is the cost? Well, let's assume it's 26% of the current year current tax bill. If we're generous that's £7 million loss.

This is not much of a tax story. This is a storm in a tea cup about a company that is seeking to avoid its liabilities wherever it might, believing that in doing so it is doing what is in the best interests of its shareholders. I question that. I'd suggest that this company has benefited very well indeed form being UK tax resident. Instead of the directors now undertaking what looks to be as much a politically motivated stunt as a real business decision they should be arguing for retention of the current tax regime that has suited them so well. Why aren't they doing that, I wonder? Is it because they're more interested in the stunt?

What is certain is that as an indicator of a trend it is, like Shire, a poor example to pick on, not least because I rightly think that if most of a company's profits are earned outside the UK then they should not be taxed here. UBM seems to have turned this into an art form, but let's not cry. What's left after this stunt takes place should, if rigorously pursued by HMRC, generate as much tax for the UK in the long term as anything it has done to date. In that case the only losers are the City. I can live with that, but that's the story no one else is telling.