Northern Rock: the significance of Granite to the Bank of England

The Guardian published two stories on Friday concerning the relationship between Northern Rock and its shadow entity, Granite. I'll be candid, I know the stories have been influenced by what's been written here: I was the only source named in the stories.

This led to a fairly mad day on Friday, when in two spare hours between meetings in London I dashed from the studios of Sky to Channel 4 and also recorded radio material for use in the North East.

But my media coverage is not the important bit. The Guardian story sought to develop another new angle on this aspect of the story, to add to that on governance and the abuse of charity which have been greatly troubling me. This is that there is a very real problem in the structure of the Granite relationship for the government, now out of pocket to the tune of £24 billion to Northern Rock. Let's go back to the Northern Rock balance sheet, depicted graphically here, and borrowed from its own published accounts: 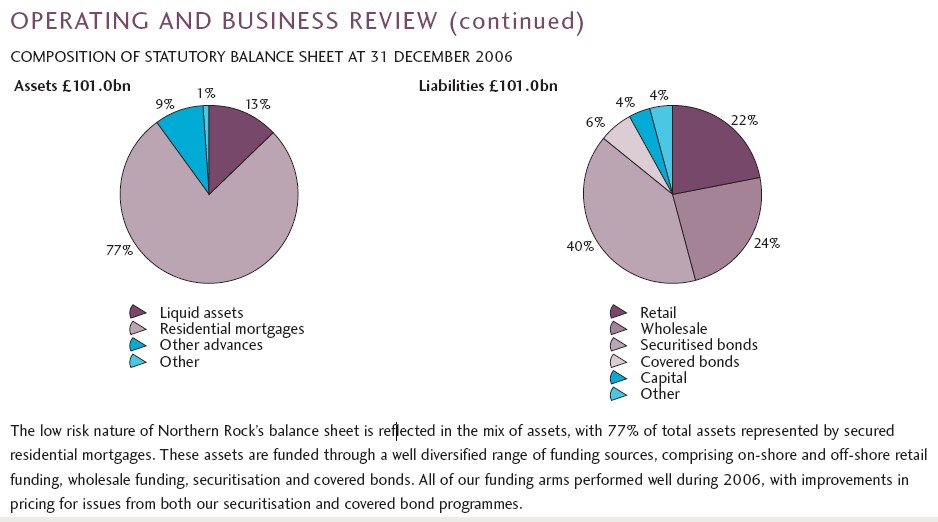 We now know that £53 billion of the mortgages included in the assets are not owned by Northern Rock at all: they're owned by Granite. That means the 40% of the liabilities on the right hand side aren't liabilities of Northern Rock at all. They're liabilities of Granite. You can ignore the whole "securitised" bit as a consequence. And the covered bonds. And maybe assume that some of the wholesale is also in this category by now. But you also have to remove 53% (because the numbers happen to add to almost exactly £100 billion by chance 1% = £1 billion) from the left hand side - which reduces the 77% of residential mortgages to 24%.

Doing so and recasting the figures out of the reduced total you get a real Northern Rock balance sheet which says that the assets are actually like this:

Now, the liquid assets (otherwise called cash) have gone: there's been a run on the bank. The depositors have taken their money. The "other advances" are poor quality, you can be sure. There's no security for them because we know they're not mortgages. And the remaining mortgages are likely to be lower quality than average for one of two reasons: they're either old and not good enough to include in the securitisation programme or they're new. That also means they're lower quality: it's clear Northern Rock abandoned quality for quantity when offering one in five new mortgages earlier this year. These are going to have an above average default rating: not helped by the fact that the borrowers know they're dealing with a lame institution.

As a result, in terms of security for the loans the value is now likely to be £24 billion of mortgages, with a higher than average default rate likely, and with all the rest of the assets next to worthless or already departed.

What's the problem then? Well, it's this: the Chancellor say that the £24 billion advance is covered by a rock sold £77 billion loan book. Northern Rock says its covered by a £100 billion loan book. And put unsubtly, that simply does not seem to be true. It's covered by a loan book of much less than than and of much lower quality than the whole Northern Rock book. The Bank of England has got the rump end of the assets. And they're worth almost exactly what it has advanced, based on this analysis.

Either that, or it now owns big chunks of Granite debt, in which case we should know, because yet again the risk profile is not the one that has been represented to exist by the Treasury in that case. If the Treasury actually owns Granite debt then it ranks alongside other claimants on that debt, it's not likely to rank above them.

Either way, the Guardian report is right: the debt security of Northern Rock is not as good as has been suggested. It may be much worse than suggested. And the line of credit may really be at its limit. Which explains the panic about selling the shares in the bank, a policy which in itself represents a wholly misguided understanding of the importance of equity in a situation such as this when the creditors have to come first.

And whatever Northern Rock says about this structure being well known to the City, it remains shocking to anyone else who has not been corrupted by the City's way of thinking. And the use by Northern Rock of a structure designed to ensure its City financiers walked away without risk if it went bust has left the government more exposed than it might otherwise be as lender of last resort. And let's be unambiguous about this: that is exactly what was intended. Which is a story that needs to be told, and I'm glad to have played a part in doing so.