I'm grateful to friends in Jersey for sending me a letter sent to all members of the States of Jersey on Monday by Terry Le Sueur, Jersey's finance minister.

Terry's been reading my blog. And in particular the one about the Isle of Man failing to secure EU approval for its tax regime. 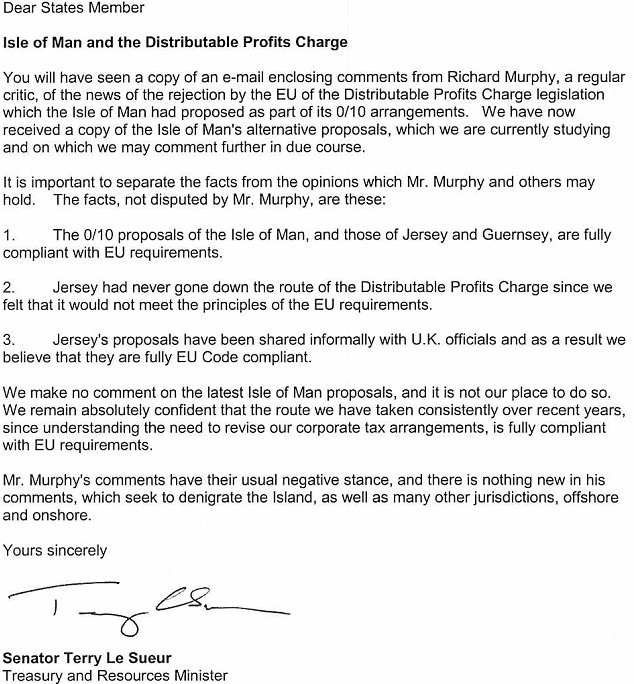 He's right on 1 and 2. But then Jersey paid me to tell them that. So it's unsurprising.

But point 3 is fascinating. Le Sueur (to use the formality he accords to me) has often claimed that Jersey's new tax system is fully EU compliant. He and Senator Walker have said so repeatedly in public. And now he has admitted in writing that this is not true. All that has happened is that informal discussions have taken place with UK officials and they are confident that the proposals are Code compliant.

No doubt those were the same officials who told the Isle of Man the same thing.

And he should, I am afraid, place little faith in the UK opinion on this matter. Dawn Primarolo was well known in the EC to be the sole person on the Code Group, that has to actually approve these laws, who believed you could be Code compliant by pretending to shift you're ring fences into the personal taxation domain. And she's gone.

So I'm afraid to say you're wrong Terry. I think you know it.

And as for from my comments adding nothing new they do the exact opposite. First they confirm that I'm a sound judge on these issues. Second they added a new criteria for review of legislation not known about at the time I was working in Jersey. That's very new.

And while I'm making correction, I am not denigrating the Island - whether it be Jersey or the Isle of Man. I care about both. I'm denigrating those, such as Le Sueur who have sold them out to those in the financial services industry who wish to use them to undermine the world's tax systems and the whole system of democracy that is dependent upon a government's ability to collect the tax due to it. That's quite different. And much more personal.