Someone has to say we need more progressive taxation

Thankfully the Lib Dems have had the courage to do so. As the Guardian has noted:

Deputy leader, Dr Vince Cable, will seek to take advantage of "genuine disgust" at tax dodging by the super rich to garner support for the party's policies to redistribute wealth.

Research carried out for the party indicates that 84% of the public believe the earnings gap between rich and poor is too large - with the figure rising to 92% among Lib Dem and Labour voters.

Some 72% think wealth inequalities have grown worse under Gordon Brown's stewardship of the economy, while two thirds want the richest to pay more tax, according to the poll.

I don't like the word 'hammer' at all. I also don't believe it. All most people want is a genuinely progressive tax system.

We haven't got that. Using national statistics data I recently produced this graph. It shows gross income including the value of state benefits paid in cash and in kind (mainly education and health) compared to total tax paid. From £55,000 on we have a flat tax in the UK. 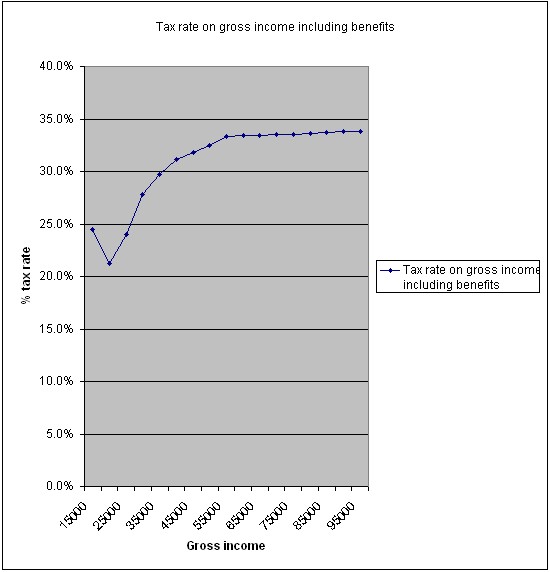 There are three ways to tackle this:

None of these hit middle income families as would, for example, removing top rate tax relief on pensions and as would simply abolishing the cap on NI contributions (bar 1%). If either of these were done the tax rate for those earning between £40,000 and £55,000 would become more progressive but the impact above that level would be more limited. My suggestions create increased progressively above that level. Which is fair, just and economically justifiable and appropriate.