The scale of EU tax fraud

I am presenting evidence to the EU Parliament's Tax3 Committee this morning on VAT fraud. In advance of the hearing the Committee asked for my written submission on a number of issues. These were the comments I supplied. I will publish my notes for the oral evidence I will submit separately:

‘How come that a solution to tackle VAT fraud could not be found?’

1. Can you present the latest development of VAT frauds? Can you shortly present a typology of VAT fraud?

It is estimated in the UK that 13% of the total VAT gap arises from bad debt and less than 1% is due to tax avoidance[v]. Taken together these estimates imply that suppressed data from trade in the domestic shadow economy may, in the UK, contribute 62% of the VAT gap, which is the difference between VAT theoretically due and that actually paid. A word of warning should be added: as the table attached as an appendix to this note shows, the UK has one of the smallest shadow economies in percentage terms in the European Union. It is entirely possible that other countries may suffer higher rates of loss to the shadow economy as a part of their overall VAT gap than the UK does.

2. Have you identified adaptation of the frauds following the implementation of the mini one-stop-shop (MOSS)?

I have not researched this issue.

3. Do you see the one-stop-shop (OSS) as a solution to VAT fraud or do you expect and adaptation of the fraudsters to this new regulatory environment?

I expect that the OSS will reduce VAT fraud and I do not see it as being as easy to combat as other measures have been in the past. There will be a requirement that VAT be charged on all sales at the VAT rate applying in the country of end-user consumption. The option of not paying tax on exports, and imports within the EU, will therefore be eliminated. If a requirement that VAT be enforced on all imports made through online portals, such as Amazon and eBay, then the risk of fraud arising in this way will also be considerably reduced.  As Amazon has recently noted on its website as a result of recent changes in the law in Australia to tackle online abuse[vi]:

If you are selling a LVIG item on amazon.com.au and you are dispatching to a customer in Australia from outside Australia, one-eleventh (1/11) of the sales price and delivery cost that you set in Seller Central will be deducted by Amazon and remitted directly to the Australian Tax Office (ATO)

This simple, but effective routine is going to be hard to evade.

4. Can you give an indication of the size of the resources dedicated to the fight against VAT fraud in Member States, generally and in some of them?

I have sought to answer this question by surveying EU tax authorities to ask about their approaches to the tax gap in general and the resources dedicated to the task of closing them. This work has been undertaken as part of the Combating Financial Fraud and Empowering Regulators (COFFERS) Horizon 2020 project. Responses were poor: just six countries replied and most information supplied was too scant to use.

This reflects the fact that by no means all EU member states undertake any work on tax gaps. In 2016 the EU suggested that the following states were doing so [vii]:

The OECD has suggested others might be doing so as well: there is evidence that Denmark, Sweden and Lithuania are doing so, as well as the European Union itself with regard to VAT. This does however leave only half of members states taking any proactive steps to determine the scale of the tax gap they face, which must be seen as an essential pre-requisite for planning the allocation of resources to tackle this issue.

Evidence from the OECD on tax administration management[viii] published in 2017 and relating to the calendar year 2015 does not indicate the number of staff dedicated to tax abuse. I am currently engaged in undertaking research on tax administration efficiency using this data but am unable to present findings at present. I might be able to do so by early autumn.

5. Is VAT carousel fraud a European problem only or are other countries facing this problem too? If yes, could you present how they address this type of fraud?

VAT carousel fraud has, as I understand it, largely exploited the peculiarities of the EU VAT system and its commonality between members states and the opportunities it has provided for exploitation of cross-border VAT trade without VAT being charged at the point of export (to date). I have not seen much evidence of it being a problem elsewhere, but nor have I spent much time looking at the issue.

6. Innovation can play a role in the fight against VAT fraud. It is said that the blockchain technology could help reducing VAT fraud. Do you agree with that? Can you explain why and how it would help putting an end to VAT fraud?

This is not an issue I have looked at and on which I am not expert enough to comment.

7. Taking the different national VAT systems and enforcement rules in place, do you see that there is a risk of cross-border shopping and arbitrage by criminals? Could you comment on the concerns of some Member States in this regard?

All tax law is subject to abuse and arbitrage.  That is because arbitrage, by its nature, depends upon differences between tax systems to exist and it is a matter of fact that there are, and will remain, differences between the VAT systems of differing EU states as a result of different tax rates; different translation of EU directives into local law, different administrative procedures, different enforcement regimes, and weaknesses in border controls. The ways to reduce this risk are by:

That said, this has a cost, and at present with too few states seeking to appraise their losses to the tax gap what that cost is cannot be appraised by at least half the EU member states, including many with the largest tax gaps. In the circumstances their chance of directing resources towards closing that gap in a cost-effective manner are low. This is an issue I will address in the presentation I make.

The following data may be of use in appraising the losses likely to arise to VAT fraud in the EU: 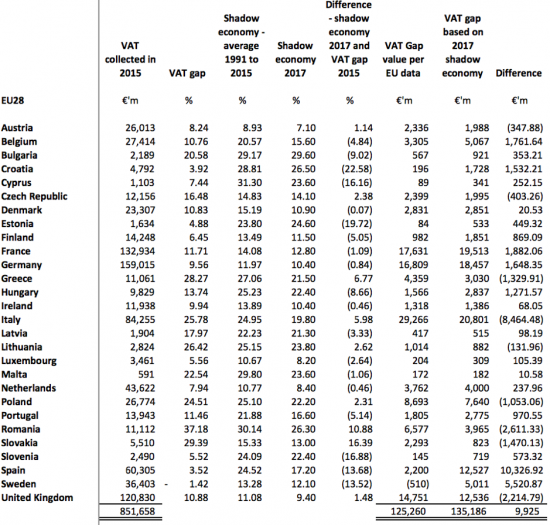 VAT collection data is from OECD sources[ix]. The VAT gap data is the EU estimate for 2015[x]. Shadow economy data is from the IMF[xi] and is a long-term average and 2017 data, which is generally lower. The estimates of the monetary value of the VAT gap are my calculations and assume that the sum lost is on theoretically due liabilities assuming the VAT gap for the EU or 2017 shadow economy data were to be true.

As will be noted, depending upon the basis of calculation, the VAT gap is estimated to be between 125 billion and â‚¬135 billion a year. It is stressed that these figures should be considered approximate and estimates. It should not be implied that this sum could be recovered in full by action to tackle the issues discussed in this note. It does, however, indicate the significance of the issue to which, it is suggested, far too little attention is being given.