Corporate UK is swinging into full self defence mode

Corporate UK is swinging into full self defence mode in the wake of the Carillion collapse. These headlines comes from an FT email this morning: 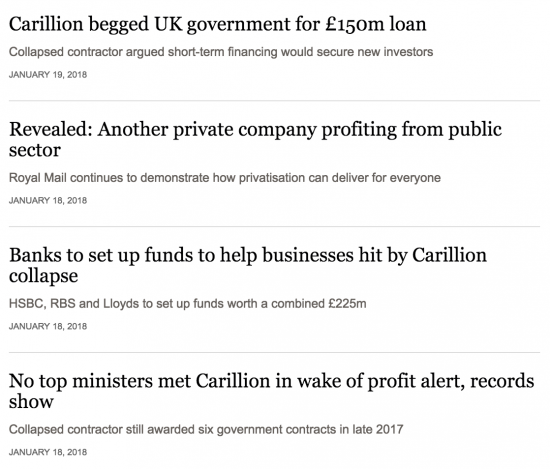 What are the messages?

First, that the directors took the right actions.

Then, that it was the governments fault they failed because they would neither meet them or appreciate that they had a duty to help.

Third, that privatisation does really work despite such hiccoughs.

And, fourth, the market's always there to lend a hand (even if, as I argue, not suitably).

It's all puff and nonsense, of course. And deeply political.

And if there is any doubt, note the FT editorial today: 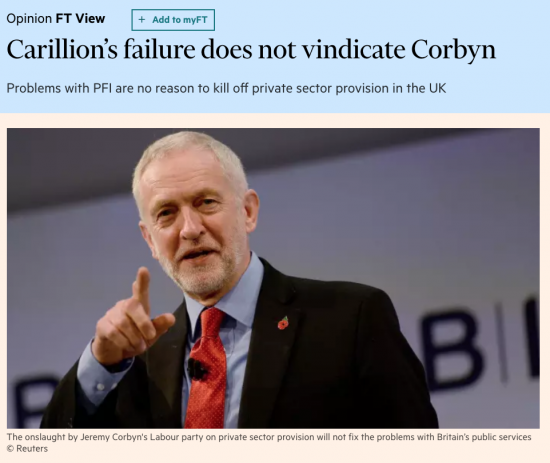 One of the biggest PFI contractors has failed.

The NAO says PFI is the costly alternative for infrastructure financing.

But heaven's above, it's still the right thing to do according to the FT.

The message is clear: never, ever let evidence get in the way of good dogma is what s being said.

It's time the FT smelt the coffee and woke up to reality. The market has failed here. It's not a matter of dealing with it as a result: it's a matter of living with that fact. No amount of words from the FT will now change that.