The increase in debt misery is not chance: it is by design

As the Guardian notes this morning (and the length of the extract is important given the importance of the issue):

The number of households struggling with problem debt grew by a quarter between 2012 and last year, as stagnating wages forced a growing number to borrow to get by, according to the TUC.

By 2014, 3.2 million families were spending at least 25% of their gross monthly pay on servicing unsecured debts, the definition of problem debt. The figure for 2012 was 2.5 million, according to research commissioned by the TUC and Unison.

Young people, the self-employed and low-income families recorded the biggest increases in debt.

The report said 1.6m households were spending 40% of their gross income on repaying non-housing debts. Of those, 1.1 million were earned less than £30,000 a year.

This is not chance. As I have explained on the blog, time and again, if the Chancellor is to reduce his borrowing (which effectively means he wants to increase his savings) then someone else has to spend instead. That is a simple accounting fact that cannot be avoided.

So, George Osborne has effectively been forcing households to borrow, by holding their real earnings constant, by cutting benefits and letting some key aspects of inflation occur. They have reduced their saving as a result as this chart from the Office for Budget Responsibility shows: 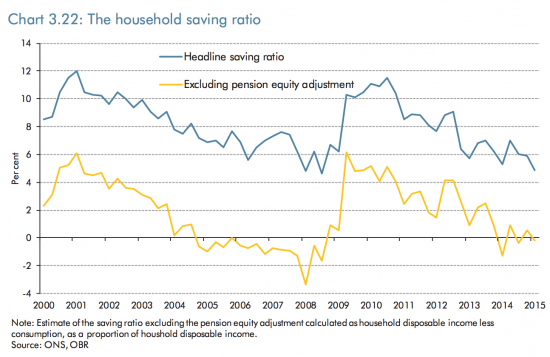 A reduction in saving means that overall many will have borrowed more. And this is the plan, as this chart from the same source shows: 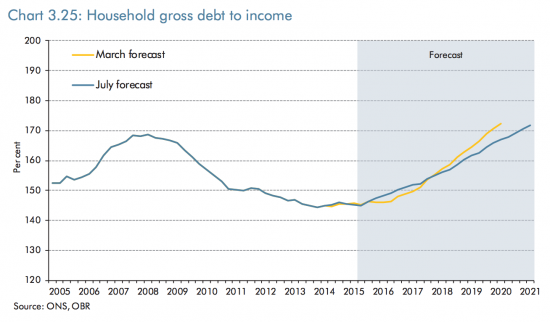 George Osborne is planning that households should go into considerably more debt so that the government can reduce their debt. It can be stated as simply and directly as that: this is the explanation of his plan to reduce the government deficit. He is simply shifting it to 0thers.

It is also the inevitable consequence of his trying to achieve that goal through austerity that will mean that there will be only limited real income growth at best, and unevenly spread at that.

In that case the misery that the TUC reveals resulting from debt burdens that households can hardly manage is not by accident, it is created by design, and it is meant to get worse.

This is the real debt crisis in this country.

If you want to know why we need a different economic approach this is one, very good, explanation.