Accountancy Age has noted my challenge to Bill Dodwell, head of tax at Deloittes, and put it on its back page: 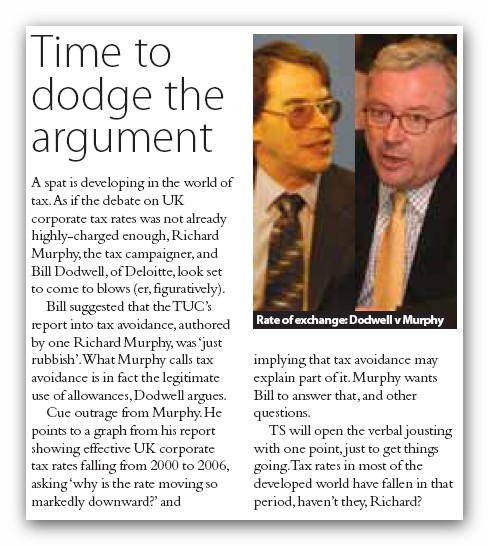 Which gives me the perfect opportunity to provide an update on Bill's response. He is, he says " sorry that I do not have time to meet."

What, never? Your diary is booked form now to eternity Bill? Amazing.

PS Yes, you're right AA: some claim tax rates have fallen around the world. But if you're a little more statistically sophisticated and weight these things by population or GDP per head you'll find that it's not by nearly as much as thing's like KPMG's tax rate survey would imply. In fact, it's not by very much at all. Certainly not enough to explain that graph, which was, after all, for UK companies. And the UK tax rate was a constant throughout that period and so were the companies in the survey.

That question does need answering, not least because some of the data in the survey was audited by Deloittes.