Tesco’s tax: we’ve got a right to talk about it

The Guardian has admitted that it libelled Tescos in its articles (no longer available on the web) published in February in which it alleged that Tesco avoided corporation tax using a complex offshore structure. This follows the apology it published two weeks ago.

I have advised the Guardian, but not on the original stories it published concerning Tesco, and there are therefore some constraints on what I can say on this matter. This blog has been prepared only with regard to materials in the public domain, or which I have generated.

What is apparent though from the tone of the Guardian's defence is that this is an admission on technical grounds. Put simply the Guardian is admitting the original story was wrong. Tescos could not have shifted properties tax free out of the UK as the Guardian claimed. No device to do that existed, as became clear as further information emerged relatively soon after publication. The story as published was, therefore, wrong and the libel admission follows with regard to this aspect of the story.

The Guardian maintains that the story was not wrong with regard to stamp duty, where it seems that Tescos did undertake a serious tax planning exercise. It remains appropriate to question whether this was an appropriate course of action on its part, in my opinion.

I want to stress something more though. Just because the Guardian got the detail of this story wrong, and it did, does not mean Tescos did not seek to avoid corporation tax when structuring this deal, even if its primary aim was to save stamp duty. It did, in my opinion, implement a corporation tax avoidance scheme to ensure that its stamp duty savings were not negated by corporation tax changes. This is what anyone would expect, and any company would do that if undertaking such a scheme. I said why and how I thought that was the case after I met and interviewed Tim Voaks, Tesco's tax director. I might refine that blog a little based on what I now know, but the core seems valid to me. Tesco chose to structure their deal to ensure minimum tax was paid in a way that I think constitutes tax avoidance. What must be clear now though to anyone who read the original Guardian story and my blog is that I am saying the tax avoidance I think took place is very different from that which the Guardian alleged. Let me be clear as well how I am defining tax avoidance here. It is:

This is based on a definition offered by Prof David Ulph at a KPMG seminar.

I remain of the opinion that Tesco used such a structure for stamp duty, and I think the structure chosen was complicated because of the motive to save corporation tax on the deal. I stress, the law was not broken. But I do think the structure was contrived (no one could surely believe otherwise having read the detail), was motivated by tax saving, would not have been ordered as it was but for that reason, but did not alter the economic substance of the deal: the stores remained exactly where they were and traded unaltered by the transaction. As such whilst it is clear that the Guardian was wrong, I do not think this means Tescos did not undertake tax avoidance. And I have no doubt corporation tax was considered in that process, and saved as a result.

Incidentally, using the tax gap methodology (but ignoring in this case goodwill as it is immaterial), I have calculated the following: 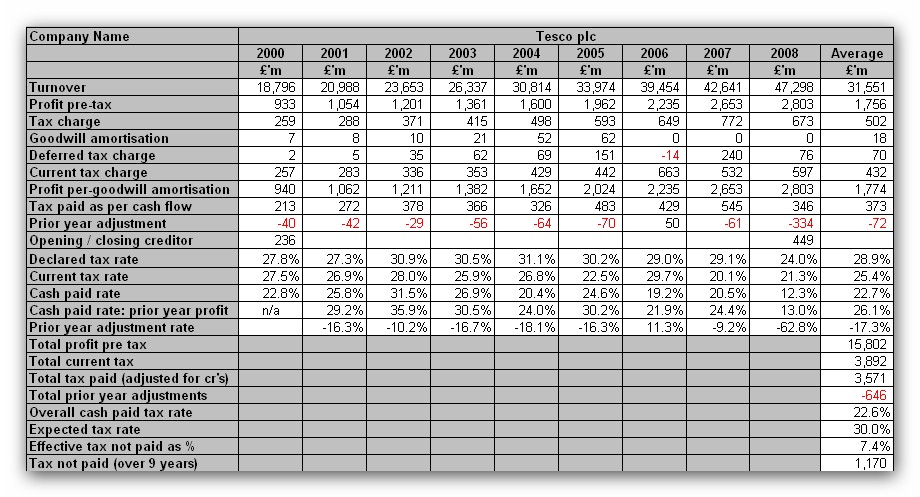 What this shows is that Tescos has a declared tax rate of, on average, just under 30% but once deferred tax is eliminated (and since this reverses in only one year this is fair) the rate is reduced to 25.4% on average. However, cash paid is less still, being 22.7% on a current year basis on average. Overall, allowing for opening and closing creditors in 2000 and 2008 the cash paid rate is just 22.6%. This reduction when compared to the current tax rates is explained in no small part by the substantial and almost continuous prior year adjustments which in all years bar one are a reduction in previously stated liability and which appear material to me in every year when related to prior year tax charges.

The consequence is that comparing this cash paid rate with the overall expected tax rate for a UK company of Tesco's size during this period says there is an expectation gap of 7.4% and £1.17 billion of tax that it might have been expected that the company might have paid has not actually been paid, spread over a nine year period. I stress throughout, I have sought to use Tesco's data. I would add the precise number is not important, per se. I could cast it a number of ways, although the one I use seems pertinent; it reflects what the government actually got and cash is king. The issue is that the expected tax was not paid.

Now of course, this does not suggest anything illegal has happened. Tax planning and tax avoidance are both normal and legal. Both could have contributed to this difference. But I offer this number now for a reason. The Guardian made a mistake on a highly technical issue. I am sorry it did. But this fact must not stop discussion of tax taking place. Tescos has not paid the tax expected of it at the rates set by parliament, using various methods of calculation. It is right and proper that this can be reported, and it is right and proper that we should be able to ask what this means, and whether as a result we think companies are making their appropriate tax contribution to the economies in which they work, and whether as a result further proposed changes in corporation tax are appropriate.

But most of all this says we need much more research into this issue and that funding for this work is urgently needed, and greater corporate transparency is also needed to make this possible. It is unacceptable that it is so hard to work out what tax a company is paying. It is odd that a number as significant as tax declared by a company can be so consistently misstated, as this data suggests is happening here (albeit, without, I stress, causing auditors concern) and it is right that the words 'tax avoidance' can be used in discussion of tax arrangements entered into by any company if it seems appropriate to do so, having carefully defined them.

That's why I offer this contribution to debate in good faith, and for no other reason. I think the right to freedom of expression requires it, now.